Hacking my Volt with a Raspberry Pi - Part 1 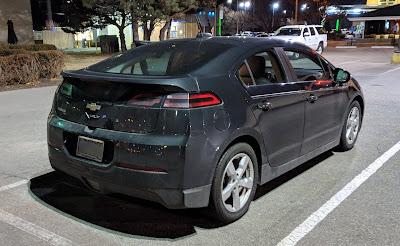 There are a few annoying things about it, though - the lack of physical buttons for climate controls, the scattered information that you have to keep switching screens to see, the fact that OnStar Vehicle Status costs $20 per month and only gives the most basic stats... There are lots of other improvements that could be made.

So I decided to do something about it...

This is just the first part in a series of posts about this project. I started writing it all as one post, but it got way too long.

Up next: History of the project

You have my attention, we also bought a used volt. In two years it’s used 20 gallons of gasoline.

Sooo...how about posting a kinda build mockup? Maybe lists of components and stuff to buy to get something similar like this working in a volt for people reading?

Can't wait to hear more about how you set this up! In particular, would really love to see some of the code running on the Pi, and the CAN bus codes sent to/from the M2

Looks great! Any additional control features afforded by this system, or is it only for monitoring? Looking forward to more updates on the hardware interface and software you used.

You have remade the functionality of the MyGreenVolt app with your own design? Very impressive work

Any chance the 110v charge rate can be set by the Pi? I primarily charge this way and in my opinion, having to navigate through several screens to set it to 12 amps every time I shift out of park is the single most annoying thing about my Volt.